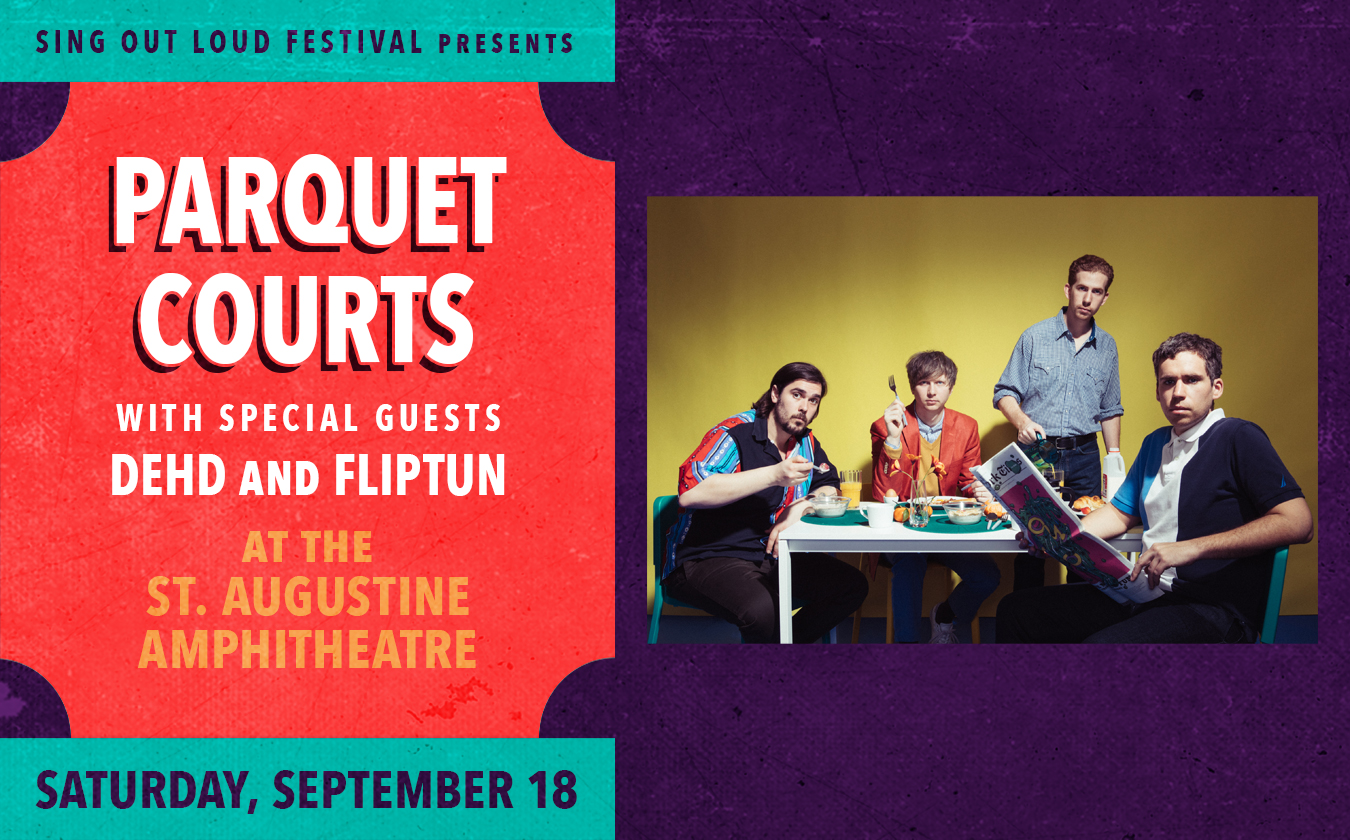 The 5th Annual Sing Out Loud Festival returns with more than one hundred live performances at multiple venues each weekend from September 10 to September 26 – making September The (Unofficial) Month of Music in St. Johns County.

Wide Awake! is New York’s Parquet Courts’ fifth record since their formation eight years ago. It’s also their most groundbreaking. It’s an album about independence and individuality but also about collectivity and communitarianism. Love is at its center. There’s also a freshness here, a breaking of new territory that’s testament to the group’s restless spirit.

In part, this may be attributed to the fact that it’s produced by Brian Burton, better known as Danger Mouse, but it’s also simply a triumph of their songwriter’s art. The songs, written by Austin Brown and Andrew Savage are filled with their traditional punk rock passion, as well as a lyrical tenderness, but are elevated to even greater heights by the dynamic rhythmic propulsion of Max Savage (drums) and Sean Yeaton (bass).

“I want nothing more than to be alone,” Emily Kempf sings early in Flower of Devotion, the third album by Chicago trio Dehd. It’s a startling admission coming from a songwriter who, just a year ago on Dehd’s critically acclaimed Water, wrote eloquently about the joys and pains — more than anything, the necessity — of love, compassion, and companionship. But then, “admission” isn’t really the right word here, given the stridency of Kempf’s tone. “Loner” is a declaration.

Not only for Kempf, who, when she wasn’t on the road with Dehd, spent much of the last year or so “totally alone, out of the game, just focused on myself,” as she puts it. It’s also a showcase for guitarist Jason Balla and drummer Eric McGrady, for the way the three of them play together, and for the seemingly impossible strides Dehd has made as a group in the short time since Water’s release. “We wanted to take a step up,” Kempf says. “We wanted to level up enough to where we feel powerful, but still in the same ballpark.”

There is nothing held back while flipturn is performing. The chemistry and talent shared between the bandmates allows for a total release of inhibitions, and their songs are written in an artfully understandable way that makes flipturn the storytellers for a generation of people who were never told what to do next.

The flipturn roll call is Dillon Basse (lead vocals/rhythm guitar), Tristan Duncan (lead guitar), Madeline Jarman (bass), Mitch Fountain (synth), and Devon VonBalson (drums). Fans are drawn to the rarity of both strong female and male presences within the band that foster a sense of inclusion in the musical experience. The fever dream energy of their live shows has positioned flipturn as a metaphorical musical sun, holding fans in a trancelike orbit.

flipturn’s music has spread to a national and international audience of music lovers entirely through organic word-of-mouth and grassroots efforts. With over 25 million streams on Spotify and sharing the stage with the likes of Mt. Joy, Saint Motel, and Magic City Hippies, the band shows no signs of slowing down.